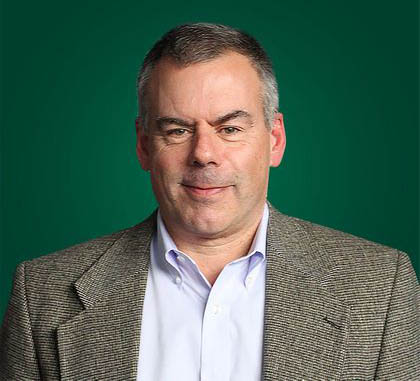 HINGHAM – Larry Chretien, Executive Director of Mass Energy, certainly knows how to fill a room. With oil and natural gas prices still soaring and the cost of energy on everyone’s mind, over 80 people from Hingham and some surrounding towns filed into the Hingham Public Library on Monday night to hear Mr. Chretien discuss renewable energy options for communities include an emphasis on wind generation. Clayton Handleman of REACH introduced Mr. Chretien, along with Hingham Municipal Light Board Chairman Kevin J. Bulman and General Manager, John G. Tzimorangas. Mr. Handleman credited the Light Plant with installation of a solar array project at Hingham High School and the recent installation of an anemometer (wind measuring device) at the Town Landfill, to determine if the site is feasible location for a wind turbine. Hingham is in a unique position as the Town has its own electric company, who can control its own power supply portfolio.

The forum, sponsored by the Hingham Municipal Lighting Plant and Hingham Wind, an ad hoc committee of REACH, ranged from discussions of discount heating oil programs, to climate change, to wind energy and the unique opportunity that cities and Towns have in controlling their future when it comes to where it receives their energy from. Mr. Chretien, a Quincy native, quoted Emory Lovins when discussing what people are looking for, “People want a cold beer, a hot shower, illumination, mobility and comfort”. This was a unique way to describe the way people view their energy requirements. Mr. Chretien discussed that 119 cities and towns in Massachusetts have the wind resource to support multiple wind turbines and generate enough energy locally to power thousands of homes. Even with this resource, Massachusetts lags way behind other states in harnessing wind power. Mr. Chretien displayed a map showing the wind resources in all 50 states and Massachusetts is in the lower tier of energy produced by wind resources. Mr. Chretien explained that wind energy is a zero emissions source of electricity, which makes it distinctly different than the traditional fossil fuel driven generating sources. The life span of a wind turbine is 20 to 25 years and presently there is a worldwide shortage of turbines and the lead times to receive equipment is over a year after an order is placed.

Mr. Chretien also discussed other ways that communities can become more conscious of their effect on the environment. One of Mass Energy’s first initiatives under Chretien was to create a market for Renewable Energy Credits (RECs.) One REC certifies that 1,000 kilowatt-hours (kWh) — or one megawatt-hour (mWh) — of electricity has been generated from a renewable energy source such as a wind turbine. When a company with a large carbon footprint purchases RECs from a renewable energy producer, the company can legitimately claim that part of its energy is low-carbon. Towns with municipally owned renewable energy producers, such as wind turbines, can profit by selling RECs (as the City of Newton and others have done), and can then use the profits to keep their own rates low.

Mr. Chretien described two initiatives in New England that will also potentially added to the consumers energy cost. The first is related to the Regional Greenhouse Gas Initiative (RGGI) which is a program to reduce carbon dioxide emissions from power plants. This program, depending on the auction price of the program could add between 2 and 4% to the cost of energy produced. The second initiative is that customers, through their utility bills will be making capacity payments to generators “just to be there for the peak times”. He described this in context of why energy conservation and reducing demand is a key component of keeping our energy prices under control and dealing with the issue of climate change. Mr. Chretien challenged the audience to be more proactive in conserving energy and reducing the dependence on fossil fuels as he commented that fossil fuel cost will only increase over the next 20 years.